The Perry-Beadle flying-boat and a partially completed B.E.2 in the Saunders shed, autumn 1913.

The Perry-Beadle flying-boat and a partially completed B.E.2 in the Saunders shed, autumn 1913.

The decision to produce the T.1 arose through the personal desire of Sam Saunders to market his own aircraft designs and was a measure intended to offset the effects of boat-building contracts lost during the First World War.
The first all-Saunders design, the T.1 emerged in 1917, the product of a very small team under the leadership of H.H. Thomas, recently established at Cowes. The designation T.1 derived from the surname of its designer but the aircraft never received a name. The sole example was a two-seat land-based biplane.
The T.1 had single-bay unstaggered folding wings and with wire-braced extensions to the upper wingtips. Ailerons were fitted to the upper surfaces only. Construction was of wood with a fabric covering. The tail unit was of conventional design with single fin and rudder and monoplane tai1plane.
The wooden fuselage of the T.1 had Consuta copper-sewn plywood covering with no metal fittings or bracing wires. Dual flight controls were installed and all engine instruments and controls were duplicated in the rear position. The observer in the rear cockpit had a Scarff-mounted Lewis gun and the pilot a fixed forward-firing synchronised Lewis. The precise intended role of the T.1 is difficult to define. The cutaways in the lower mainplane trailing edges perhaps indicate a reconnaissance role; dual instrumentation suggests a trainer, but armament disposition compounds the problem.
It was intended that the T.1 could be fitted with either conventional wheeled undercarriage or floats. There is no evidence to suggest that floats were ever fitted. Designed to be powered by a 200 hp Hispano-Suiza engine, the aircraft eventually flew with a 150 hp Sunbeam Nubian, Saunders being unable to obtain a Hispano Suiza because production of that engine was being diverted to S.E.5a airframes for Service use.
Despite the reduced power, the T.1 is said to have performed well in the air. It was test-flown from Somerton during 1917 by a Maj Evans, an RFC pilot. The only difficulty experienced by Evans was a tendency to engine overheating. Before long, the prominent straight-through 'smoke-stack' exhaust, perhaps so configured in the hope of achieving extra horse power, was discarded for a more conventional arrangement, an indication possibly that the Nubian was adequate after all.
H.H. Thomas died in the 1918-19 influenza epidemic and his T.1 design was not developed further. Suggestions by two former Saunders employees that it was planned to convert the T.1 for civil use have not been substantiated. It appears that some time late in 1918 the Nubian was removed, but the fate of the T.1 airframe is not known.

NB: 'x' numbers were issued between 1917 and 1919 to private-venture aircraft which were, nonetheless, given Government authorisation through the Licence system. These aircraft were not financed by any official contract.

The only known photograph of the T.1, showing the large four-bladed airscrew and the adoption of a more conventional exhaust system. 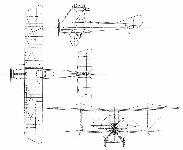 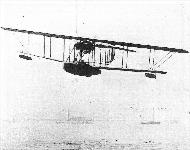 The Sopwith Bat Boat had a Saunders-designed hull and is seen here in its original, single fin and rudder, configuration. Initially, it was powered by an Austro-Daimler engine.

In January 1911, a particularly strange craft was launched onto the Medina from the Saunders sheds, then in the process of being expanded and rebuilt. Designed by a Frenchman, M. Roger Ravaud, this machine employed two transverse floats and an aerodynamic, rather than water, rudder for directional control. The craft was powered by a 50 hp Gnome aero-engine driving an airscrew rather than a water propeller. Indications are that it was fairly successful, though rather on the slow side; Ravaud intended installing a 100 hp Gnome, which he perhaps optimistically hoped would yield speeds of up to 60 mph. It is difficult to classify Ravaud's craft because it employed such a peculiar variety of features. Intended for Monaco, it never arrived; indications are that it operated in the Shoreham area instead.

The Ravaud craft on the Medina, early 1911. The new Saunders shed, in the background, was at that time under construction.
Написать автору