A late production Liberty engined D.H.9A converted to dual trainer by the Westland Aircraft Works at Yeovil in 1928.

The first Westland-built Short 166 floatplane, 9751, in the Yeovil factory, with the Salmson radial engine of another aircraft visible at the left of the photograph.

The fuselage of a Short 166 being loaded into a railway wagon in the siding of Westland's despatch department in 1916.

A Short 184 floatplane of the type built by Peller's Westland Aircraft Works during 1915-16.

Vimy H5080 taking off from the Yeovil aerodrome.

Westland's covering shop where the deft fingers of girl fabric workers were halted for this photograph of Vimy control surfaces being covered.

In 1916, with a growing number of Royal Navy ships capable of carrying and launching aircraft with wheeled undercarriages or floats, the Air Department of the Admiralty was examining the potentialities of single-seat fighters. It was also considering the means whereby such an aircraft could be designed and produced to meet naval requirements. Thus the Air Department N.1B requirement was for a single-seat shipboard float plane or flying-boat fighter having a speed of 95 knots (110 mph) at 10,000 ft and a ceiling of at least 20,000 ft. This latter requirement was particularly exacting, bearing in mind the comparatively low power/weight ratios and levels of reliability of the engine available at that time.
Three aircraft manufacturers prepared designs to meet this requirement; they were the Blackburn Aeroplane and Motor Co, the Supermarine Aviation Works and Westland Aircraft Works. Both the Supermarine and Blackburn designs were pusher biplane flying-boats but the other design, the first to emanate from the Westland Aircraft Works, was a more conventional tractor biplane floatplane. Contracts for the construction of a total of eight prototypes, all designated N.1B, were placed with the three companies; three each by Blackburn and Supermarine and two by Westland.
The design of the two Westland N.1B was the work of Robert Bruce and Arthur Davenport, the company's manager and chief draughtsman respectively. The construction, understandably, followed the standard pattern of that era. The fuselage was a conventional rectangular-section structure with four longerons and internal wire-braced frames of spruce with steel end fittings, the front ends of the longerons carrying the mounting for the 150 hp Bentley AR.1 (for Admiralty Rotary) rotary engine. Wooden formers on the upper longerons provided a rounded top surface to the fuselage. The cockpit surround was of leather-edged ply and had a small head fairing. The entire tail unit was an externally wire-braced wooden structure. The constant chord two-bay biplane wings were built up around two ash main spars with wire-braced spruce struts and ribs, and spruce interplane struts. Ailerons and trailing-edge flaps, described as a 'wing camber-changing device patented by Robert Bruce', were fitted on all four wings. The wings were designed to fold back against the fuselage sides for shipboard stowage without requiring a jury strut to be fitted at the front spar root-end fittings. Wire-braced spruce alighting gear struts carried two rectangular-section floats, each with a number of watertight compartments. Control wires to the elevators and rudder were run externally from the cockpit but those to the ailerons and flaps were routed inside the wings. The airframe was fabric-covered with a metal engine cowling and top and side panels at the forward end of the fuselage. Armament was a fixed forward-firing Vickers .303 in machine-gun, synchronised to fire through the propeller disc and mounted in a metal 'hump' fairing on top of the fuselage in front of the cockpit, plus a Lewis .303 in gun on a swivel mounting on the upper centre-section above the cockpit. A cross-bar on the centre-section leading-edge appeared to serve the dual purpose of preventing the gun from being fired through the propeller arc and serving as a front mounting for the gun fixed to fire either slightly to port or starboard. In addition two 65 lb bombs could be carried in tandem on tubular carriers attached on the aircraft's centre-line under the fuselage.
Two N.1Bs were built by Westland with some minor differences between them. The first, 16, was fitted with 11 ft long Sopwith main floats and a 5 ft long tail float carrying a water rudder which was moved by a vertical shaft extending down from the aircraft's rudder. In N17, the second aircraft, these were replaced by Westland-designed floats 17 ft 6 in in length with swept-up aft ends which made the tail float unnecessary. Some reports indicate that these floats could be fitted with a through axle carrying two wheels to enable the N.1B to take-off and land on suitably equipped vessels at sea, but no evidence of this design feature can be traced. The wheels which are shown in photographs are almost certainly those of a ground-handling trolley.
Completed during the summer of 1917, in August the renowned Harry Hawker flew N16 on its first flight from Yeovil. In October at least one Westland N.1B, N16 - and possibly both aircraft - went to the Royal Naval Air Service Experimental Construction Depot at Port Victoria on the Isle of Grain for evaluation where it was flown by Sqn Cmdr J W Seddon who, in 1913, as a young Lieutenant RN flying instructor, had had as a pupil the fledgling aviator and the First Lord of the Admiralty, Mr Winston Churchill. The reports of its evaluation against the PV.2, built by the Royal Naval Air Service Depot at Port Victoria, showed that the Westland N.1B performed well and exhibited good handling characteristics; however, before the type could be developed, a change of policy ensued. Landplane single-seat fighters, such as the Sopwith Pup and Camel, had demonstrated their ability to take-off and land on vessels underway at sea, thus removing the need for the carriers to heave to and either drop or pick-up seaplanes. Because of this change of emphasis, further production and development of the Blackburn, Westland and Supermarine N.1Bs was abandoned after cancellation of the contracts in 1917.

N16, the first N.1B, with a tail float and a humped cowl over the Vickers machine-gun.

This close up of Westland N16 shows the engine cowling's fine finish, 'hump' for Vickers gun, the gun port in its cowl, two 65 Ib bombs under the fuselage and Lewis gun over centre-section. The pistol grip and spade grip of the Lewis gun are seen above the cockpit. 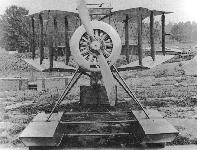 N16 with wings folded and carrying a 65 Ib bomb under the fuselage. Note the slotted engine cowling and absense of jury struts.

N17, the second N.1B, had a modified engine cowling and an uncowled Vickers gun.

Longer float on N17 allowed the tail float to be removed. 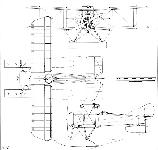 In its modified form with a reduced area fin, this Wagtail has constant-chord equal dihedral wings but with a small curved centre-section cutout.

The third Wagtail, C4293, with the flat lower wing and increased dihedral on the upper wing. Retouching has removed the tailskid.
Developed to meet the RAF's Type I Specification for a 180hp engined, single seat fighter replacement for the Sopwith Camel, the attractively proportioned Westland Wagtail appears to have been a sound enough airframe design, let down by a totally undeveloped engine in the shape of the 170hp ABC Wasp. First flown during April 1918, the twin Vickers gunned Wagtail, like its its rivals, the BAT FK 23 Bantam and Sopwith Snail, was quietly left to wither away, following the official abandonment of the Wasp towards the close of 1918. Top level speed of the Wagtail was a useful 125mph at 10.000 feet, while it took a mere 3 minutes 30 seconds to reach an altitude of 5.000 feet. Interestingly, both of these performance figures are superior to those of the Sopwith Snipe with its far more powerful 230hp rotary. Only three Wagtails were to be completed, the last, serial no C 4293 being seen here.

One of the two short fuselage Wagtails ordered in 1929. It has an Armstrong Siddeley Lynx engine, curved fin and much enlarged centre-section cutout.

Wagtail C4291 under construction, with broad-chord fin extending forward of the tailplane, equal dihedral wings and reverse taper on inboard sections of the upper wings.

Wagtail C4293 after its heavy landing on 8 May. 1918. during 'fighter trials' at Martlesham Heath.

A burnt out Bessoneaux hangar and a badly damaged Wagtail was the result of an employee's experiment with a cigarette and a tin of petrol. 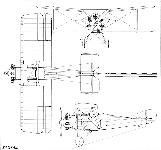 The second Weasel, F2913, shows off its neatly cowled Jupiter engine and wide-span wings, the apparent splaying of which is an optical illusion.

This view of F2913 shows the large aperture in the upper centre-section, the cut-away wing roots and the generous size of the rudder and elevators.

Thi retouched photograph of the Weasel's structure reveals a full-chord wing root without a cutout. The pilot's basket-work seat is noteworthy, as are the neat decking around the cockpit and the Scarff ring.

(The Limousine I's initial registration K-126 was carried in accordance with the provisions of the United Kingdom Air Navigation Regulations, which came into force on 20 April, 1919, requiring all British civil aircraft to carry registration markings. The International Air Navigation Convention did not come into force until 22 July, 1919, and, during the interim period, the Air Ministry introduced a system of temporary markings. It required all aircraft newly constructed or built from spares to be registered in a sequence beginning at K-100. A total of 175 such registrations were allocated during the system's short life, although K-169 was the highest K-number known to have been used. Thereafter British aircraft carried a four-letter registration group prefixed by the letter G).

The Limousine I, K-126, seen at Yeovil in July 1919, has an oval nose radiator for its Falcon III engine. Visible are the windscreen of the offset cockpit, the very long exhaust pipe and the small fin and rudder.

G-EAJL, the first Limousine II, appeared in October 1919 with an enlarged rectangular radiator and increased area fin and rudder. 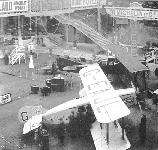 G-EAJL, the Limousine II was exhibited at the 1921 Paris Aero Show in Ihe Grand Palais.

The Limousine I K-126 (left) and Limousine II G-EAJL being prepared for demonstration flights. Note the different radiators and four-blade propellers.

The prototype Limousine III at Yeovil in June 1920. The two small finlets on the tailplane, the large rudder and absence of a central fin were unusual features.

G-EAWF was the second of two Limousine IIIs to be built. It flew with the Instone Air Line at Croydon as reserve aircraft.

Sidney Cotton's Limousine III G-EARV being prepared for a seal-spotting flight at Botwood, Newfoundland, in 1921. It has overwing fuel tanks.

Luxury was the keynote of the passenger cabin, which was button-back lined, carpetted and fitted with thick upholstered seats. The more austere pilot's cockpit is on the left.
Написать автору