Cross-Channel commercial air services between England and France were begun by Aircraft Transport and Travel on 25 August 1919, when a regular London Paris passenger and goods service was started. D.H.4As and D.H.16s were used, the latter being a four-passenger cabin conversion of the single-engined D.H.9 day bomber.

The de Havilland 4A used by S. Instone and Co, later Instone Air Line, seen at Hounslow in September 1919.

The second British airline to work cross-Channel services was Handley Page Transport, which began flying London-Paris services on 2 September 1919, with a fleet of O/400 type aircraft. There were several versions of the civil O/400 but they differed only in interior layout and fuel systems. One version, the O/11, was mainly used for cargo. Two of the passenger seats in the Handley Pages were in an open cockpit in the nose and these provided a wonderful view in summer but were freezingly cold in winter and very unpleasant in rain, hail and snow. The O/400s were much more comfortable than the D.H.4As and D.H.16s but were very slow and often took more than four hours to fly the just over 200 miles from London to Paris.

One of the Handley Page O/400s used on early British air services. This aircraft, seen with mixed civil and military markings, carried passengers from London to Manchester on 1 May 1919 - the first day of civil flying in Britain after the 1914-18 war.

Handley Page’s first purely civil transport was the twin-engined W.8, completed in 1919. It was a biplane with single fin and rudder and four- wheel main undercarriage, powered by two 450 hp Napier Lion engines and having accommodation for fifteen passengers. The W.8 saw some service on Handley Page Transport’s London-Paris route, and led to a series of aircraft of similar layout, the W.8b, W.8e, W.8f, W.9 and W.10.
The W.8b, with two 360 hp Rolls-Royce Eagle engines and seats for fourteen passengers, entered service with Handley Page Transport in May 1922. Four were built in the United Kingdom, three being used by Handley Page Transport and Imperial Airways and one being sold to Belgium where another four were constructed for the Belgian airline Sabena. 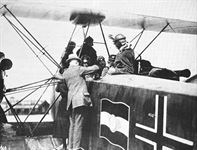 The Netherlands has played a great part in the development of aviation and two names stand out as symbols of Dutch achievement. They are KLM as the world’s oldest airline to retain its original name and Fokker as a great aircraft manufacturer.
Fokker developed a system of welded steel-tube fuselages and tail units married to deep ply-covered wood-framed wings and used these constructional methods for a series of outstanding transport aeroplanes which were in production until 1935 and in service until after the 1939 45 war. Most of these Fokker transport monoplanes were single-engined or three-engined, but there was one twin-engined type and two types with four engines. All but one of these aircraft had non-retractable undercarriages.
First of the Fokker transports was the V.44 (F.I) with open cockpits, but its construction was abandoned in favour of the V.45 (F.II) which had an enclosed cabin for four passengers and a two-seat open cockpit. Like all the subsequent inter-wars Fokker transports it was a high-wing monoplane with thick-section wing covered by plywood. The fuselage was a welded steel structure with fabric covering. The original engine was a 185 hp BMW IIIa water-cooled unit but production examples had various kinds of engines including the 240 hp Siddeley Puma.
The prototype F.II was built in Germany, made its first flight in October 1919, and in March 1920 was flown to the Netherlands. The type was subsequently produced in Amsterdam and Germany and it appears that about two dozen were built. F.IIs served KLM Royal Dutch Airlines, Deutsche Luft-Reederei, Deutscher Aero Lloyd, Lufthansa, Sabena and, on charter, DDL Danish Air Lines, and one was still in the Lufthansa fleet at the end of 1936. The prototype survived until the German invasion of the Netherlands in 1940.

In the pioneering period of air transport most aircraft manufacturing countries persisted with the biplane, generally with wood or metal structure covered with fabric or in some cases partly with plywood. Germany also built transport biplanes but made two major contributions to the development of the transport aeroplane - the design of all-metal structures and the use of the cantilever monoplane, that is an aircraft whose wing has no external bracing.
By far the biggest producer of German transport aircraft was Junkers, and as early as 1909 Professor Hugo Junkers had made drawings of a thick-wing cantilever monoplane. The first Junkers all-metal aeroplane appeared in 1915 and during 1917 there appeared for the first time a Junkers cantilever low-wing monoplane with corrugated metal skin.
As soon as the war ended, Junkers began design of the first all-metal transport monoplane which was destined to be put into production and enter airline service. This was the J 13, soon to be redesignated F 13, and it made its first flight on 25 June 1919.
In layout the F 13 was a single-engined low-wing monoplane with semi-enclosed cockpit for two crew and a completely enclosed cabin for four passengers. Originally the water-cooled engine was a 160/170 hp Mercedes D.IIIa but the early production aeroplanes had the 185 hp BMW IIIa. The F 13 remained in production until 1930, a total of 322 was built, they had a wide variety of engines and there were some sixty to seventy variations on the basic design. F 13s operated on wheel, float and ski undercarriages and played a big part in establishing air transport in Europe and many other parts of the world.
The F 13 led to a whole series of transport aeroplanes all using the same basic layout and structure although they became progressively bigger, heavier and faster as well as more reliable.

The early French air services were also started with converted wartime aircraft. The best known and most widely used were the single-engined Breguet 14 and the twin-engined Farman Goliath.
The Farman Goliath was for its time one of the most advanced European transport aeroplanes, quite large numbers were built and some remained in service at least until 1933. The Goliath, designed as a bomber, was completed late in 1918 as a passenger aircraft with main cabin for eight passengers and forward cabin for four passengers, all in wicker seats..The pilot’s cockpit was open.
As early as March 1919 the Farman Line began flying Goliaths on a Paris-Brussels service and, later, Cie des Grands Express Aeriens, Cie des Messageries Aeriennes (CMA) and Air Union operated them on Paris-London services. SNETA (Belgium), CSA (Czechoslovakia) and LARES (Rumania) also used Goliaths. In spite of their ugly appearance, with square-cut wingtips, stalky four-wheel undercarriages and frequently oil-stained cowlings, the Goliaths gave good service and one is known to have flown at least 3,843 hr. There were numerous versions of the Goliath with different engines but most of the airline aircraft had 230 hp or 260 hp Salmson water-cooled radials. Goliaths were almost certainly the first airliners to have their fuselage tops painted white to keep the cabins cool.

One of the Farman Line’s Renault-engined Farman Goliaths, seen at Brussels in the early 1920s.
Написать автору